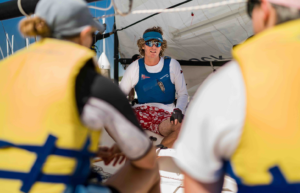 Scott joined the Royal Australian Navy in January 1998 as a Maritime Warfare Officer. In this role Scott had operational service in Iraq in 2003 and border protection operations as well as service on multiple ships, later qualifying as a Mine Warfare and Clearance Diving Officer. Scott completed postings to a clearance diving team, mine hunters and instructional roles. 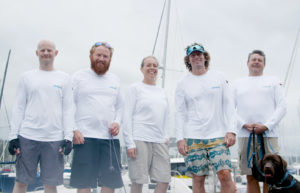 Scott was medically discharged in February 2016 with multiple medical conditions. Participating, volunteering and competing in sport has a positive contribution to enhancing Scott’s overall health and wellbeing. Sailing in particular has taken on an important role in Scott’s ongoing recovery. Scott also competed at the Sydney Invictus Games 2018 in the JLR driving challenge and swimming.

Scott was introduced to the RPAYC through the Soldier On sailing offering and went through the Club’s Keelboat Sailing program. The camaraderie and enjoyment found on the water led Scott to join the racing ranks twice weekly, and volunteer his time to encourage more veterans to get involved in sailing.

This led to Scott and his team mates to establish the Saltwater Veterans, a social network of military veterans who use sailing to be physically and mentally active, with other former serving members of the military.

The Saltwater Veterans help put on Veteran Sailing Days where veterans from around Sydney are encouraged to register for events, hop on an Elliott 7 boat and learn the ropes of sailing. 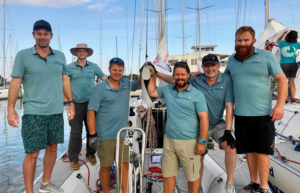 Scott is proud of the resilience he found throughout his rehabilitation journey, in which sport has played a pivotal role, and he has a personal desire to continue the growth from the Invictus Games Sydney 2018 experience. While he considers that he merely survived those Games, at Invictus Games The Hague 2020, he wants to thrive.

But it’s the ongoing benefits from regular connection with the sailing community, that delivers sustained wellbeing. After a career in the Navy, Scott was used to the water but he didn’t have a background in sailing when he started in 2016. It’s been a journey, with a lot of support along the way, and Scott is motivated to ‘pay it forward’.

“A group of four of us had come through RPAYC sailings days and wanted to try opportunities at an elevated level. At its core, our program’s modelled off established pathways within the Australian Sailing framework,” says Scott. “We needed a banner to sail under and it was also a good way of being socially identifiable. Our group of veterans is now numbering over 35 veterans and approximately 20 volunteers. Some of our team have sail raced the Sydney to Hobart and Invictus Games 2018. Others have progressed their instructor & coaching qualifications.”

“The benefits of our Saltwater Veterans banner are unity and building social connections with people with common backgrounds,” says Scott. “It can be intimidating joining a new club or organisation. We all have a common bond of military service. We also conduct our own in-house training and help veterans build new skills.” “It’s (Invictus Games) not about winning medals even though that would be pretty great. At the end of the Games I would like to look back on my Invictus Games journey knowing that I supported my mates. That understanding would improve my physical and mental health.”