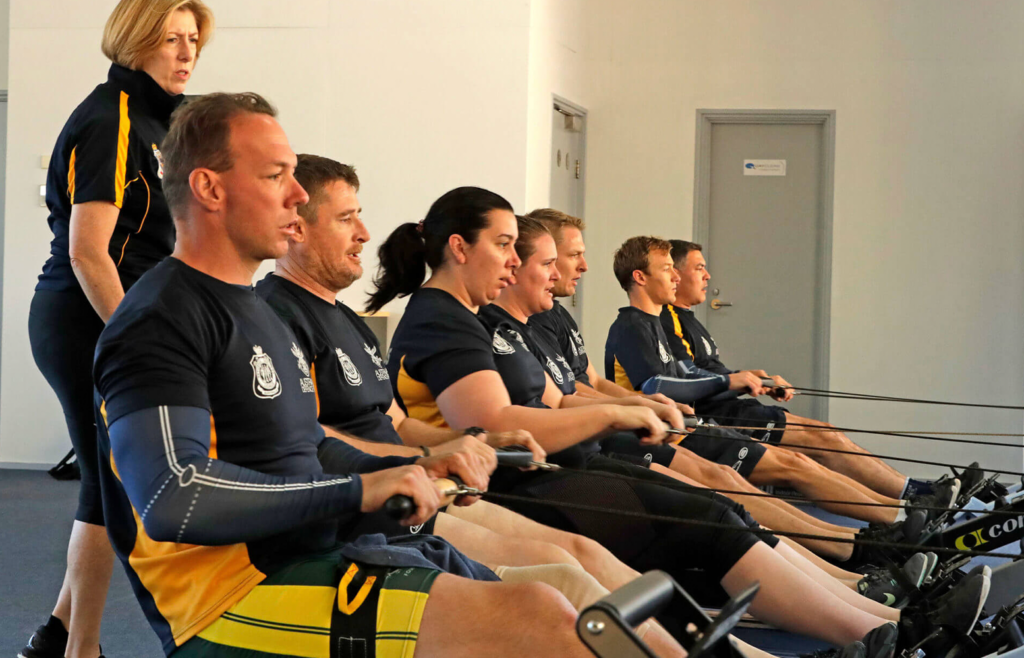 The rowing community came up with a special and creative way of honouring the Anzac Spirit this year.

The ‘2020 Anzac Day Indoor Rowing Challenge’ involved Australians and New Zealanders rowing 2504 metres as many times as possible – throughout Anzac Day – at home on indoor rowing machines. The country that racked up the most 2504 metre instalments would win the day.

There were more than 1,500 competitors across Australia and New Zealand, with an incredible combined distance rowed of 19,398 kms.

Stephen French is a veteran of the Royal Australian Air Force and will be competing in Indoor Rowing next year for Australia at the Invictus Games in The Hague. He took part in this year’s Anzac Day Challenge.

“The 2504 metres was the longest distance I’d ever done on an indoor rower,” said Stephen. “It was my first hit out at long distance rowing. But jump forward a month and the Anzac Day Challenge was like a springboard to doing longer distances. I’ve since doubled and tripled that distance.”

Stephen is currently taking part in the ‘Row to the Moon’ Challenge – he had already racked up 29,000km at the time of this interview – and believes that the Anzac Day Challenge was a real success. He hopes to be able to participate again next year and is looking into competing at the Australian Indoor Rowing Championships later this year.

“We were delighted with the success and engagement of participants from across Australia and New Zealand for the 2020 Anzac Day Indoor Rowing Challenge,” said Ian Robson, CEO of Rowing Australia. “RA is proud of the relationship we have, and continue to grow, with our veterans and serving military personnel – rowing is of course intrinsically linked to Anzac Day with the ANZACs bravely rowing ashore at Gallipoli in 1915.”

The special connection between rowing and Anzac Day was celebrated this year at the Australian War Memorial Last Post Ceremony. Sergeant Shelby Powell of the Royal Australian Air Force had the honour of doing the reading at the Ceremony, paying tribute to Private Thomas Anderson Whyte.

Private Whyte had made his name in South Australia as a rower. As Sergeant Powell read:

“At the height of his rowing powers, the South Australian papers reported that there was no doubt that Tom Whyte was one of the best oarsmen that South Australia had ever produced.”

Private Whyte was among the first to join the newly raised 10th Battalion at Morphettville in Adelaide when World War I broke out and Sergeant Powell recounted the story of Whyte’s involvement in the landing at Gallipoli:

“In the early hours of the 25th of April, men climbed down on to row boats which were towed towards the dark, silent hills of Gallipoli. Tom’s friend Arthur Blackburn, who was awarded a Victorian Cross in 1916, wrote what happened next: ‘The most dangerous position of the lot was that of the men who were rowing, as they could take no shelter. They could not even crouch down in the boat, but were compelled to sit up and row. The dangers of such a task were so apparent that officers were hesitant to order men to expose themselves to the work of rowing. Tom immediately grasped the situation, and, as everybody knew he would, volunteered his services as a rower.’

“As the boats crept in towards the shore, the fire became hotter and hotter. Just as the boat touched the shore, Tom slipped over the bottom of the boat. He was hit badly.”

Private Whyte had been shot through the pelvis. He was taken to a hospital ship for treatment but died on his way to Alexandria. He was 29 years old. Arthur Blackburn credited Whyte with saving many lives, writing that ‘there is no doubt that it was largely due to the courage and endurance of Tom and his fellow-rowers in all the boats that everyone was landed with the minimum of loss.’

“We now remember Private Thomas Anderson Whyte, who gave his life for us, for our freedoms and in the hope for a better world.”

The connection between rowing and Anzac Day, and the goodwill generated through the Indoor Rowing Challenge, has already got us looking forward to next year.

“The success of the 2020 Anzac Day Indoor Rowing Challenge has led to RA looking to explore, with Rowing NZ, an ongoing yearly indoor rowing event to engage not only with our rowing community, but most importantly with our military veterans,” says Ian Robson. “We want this event to be an opportunity to, most importantly, commemorate our ANZACs but also raise funds for key charities and help with the health and wellbeing of participants.”