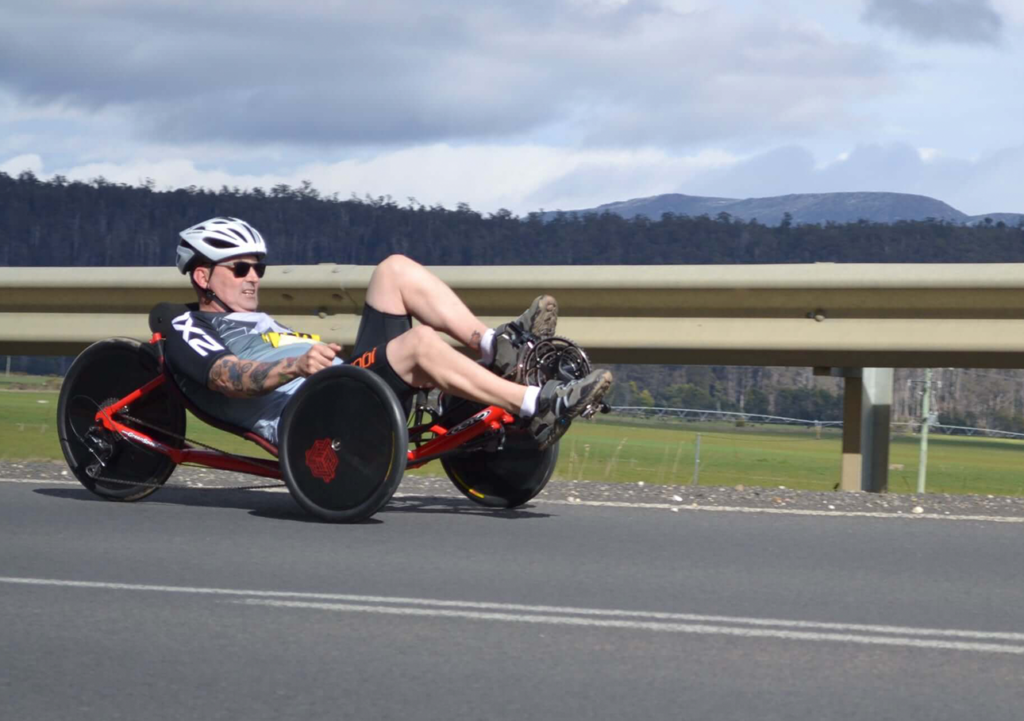 Adapt as you go

“I didn’t feel great at all, I wasn’t riding well,” says Jamie. However, digging deep for the second half of the race, Jamie drew upon his competitive nature and the support of the cycling community. A veteran with just under 10 years of service in the Royal Australian Navy, he came away with a silver medal in Cycling Tasmania’s first Para-cyclist State Championships.

Jamie ran into Shellie Wakefield, Operations Manager with Cycling Tasmania, while she was hosting a club race. From this chance meeting, Jamie found out about para-cycling’s inclusion into this year’s State Championships. Shellie was able to get Jamie entered and ensured that he had everything he needed for the race at Deloraine on 22 August.

Getting to the start line

Jamie had a number of obstacles facing him, the largest of which was his lack of classification in para-cycling.

A cyclist must be classified into a category in order to be eligible to compete in para-cycling. Achieving this in a short timeframe was made possible by Keren Faulkner, the Para-cycling Head of Performance Solutions at Cycling Australia.

On the obstacles Jamie faced, Keren said: “Often barriers like this arise at the beginning of people getting into a new sport. It is crucial to collaborate to work through this and give everybody a way to integrate into cycling clubs and compete.”

Jamie was greatly appreciative of all the officials involved in getting him to the starting line.

“They were absolutely fantastic, and Shellie and Keren were amazing,” says Jamie.

A lifelong passion for sport

Restricted from some sports as a child after being born with one leg shorter than the other, and with flexion issues in his right foot, Jamie never let this slow him down.

Of his childhood with highly athletic brothers, Jamie says: “It absolutely affected what I could join in on, but my parents never let me feel different to them. I’ve always just adapted my focus to what I can do, for me.”

He may be a beginner in para-cycling, but Jamie has experience with sport at the highest representative levels.

Jamie was a national representative kayaker and the recipient of an Australian Defence Force sporting scholarship for marathon kayaking in 2015 and 2016. He represented Australia in the Canoe Marathon team that competed at the Masters World Cup. When asked for the highlight of his career in representative paddling, Jamie names competing for the Navy Dragon Boating team while serving in HMAS Cerberus.

Adapting as he goes

After painful back injuries, first in 2010 and then a further devastating back injury in 2016 that saw him leave Defence, sport was the last thing on Jamie’s mind as his struggled through recovery using crutches, a walker and a wheelchair. However, while Jamie’s issues with his back and legs may be ongoing, it’s been sport that’s always given him a reason to keep striving.

“It’s all a part of life,” says Jamie. “When you drop the ball in a game it’s not game over, you pick it up and go again!”

Jamie Fergus considers himself more passionate than most people about the power of sport. He’s already had success in wheelchair racing, winning races in Burnie and Auckland, and is motivated by regular swim training with the Ulverston Swim Team.

“They are an amazing swimming club, and our coach Liz modifies the programs to my needs and ability,” says Jamie. “I am very lucky I have people like this in my life that keep me motivated.”

Jamie’s future goals include trying out for the Invictus Games, inspired by friend and former Tasmanian resident Matthew Brumby, Captain of the Australian 2018 Invictus Games Team.