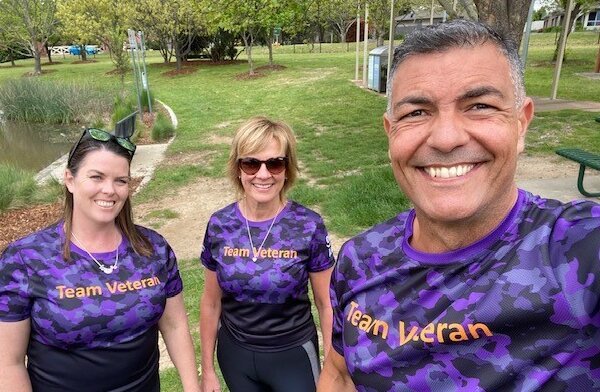 Ben soldiers on with sport

Ben Farinazzo had to use everything he had in the tank, and then some. It was the last few seconds of the final in the one-minute indoor row at Sydney’s 2018 Invictus Games and Ben seemingly had no chance. “I remember looking at the screen with only few seconds left, seeing I was in fourth place,” says Ben. Somehow, almost miraculously, in those last few gigantic, heaving strokes Ben pulled ahead to first place and took out the gold medal.

Surrounded by his family, it was a glorious moment for Ben that was both vindicating and validating.  “Personally… I really needed that in my life,” says Ben. Ben had pushed through some dark times, too many to remember, both physically and mentally, and arrived at a point in life where he was not only a survivor, but a winner.

“It was so good just to hold that medal up and give it to my family, says Ben. “And not just to them, but to all the people that had helped me get through.”

The Invictus podium in Sydney, with cheering family and jubilant crowd applauding his superhuman effort, was a long way from where Ben’s wife found him in the shower, balled up in the foetal position, crying, suffering the acute effects of PTSD. And it’s an even longer way from East Timor where a young 24-year-old Lieutenant Farinazzo witnessed the horror of what became known as the Suai church massacre.

But that’s the recuperative power of sport. Sport helps everyday people bond, and veterans, with their heightened sense of team welded into their social DNA, respond extremely well to sport, says Joe Losinno, National Psychology Services Manager and Clinical Psychologist at Soldier On.

“Sport typically happens in a team. The connections made are important in fostering support and care. Participation with Invictus Games provide meaning, a goal, it’s not winning that’s important, its participating, and working towards something meaningful, not just for yourself, but for others to use as a roadmap for recovery.”

This is certainly true of Ben’s case. Ben’s circuitous journey to the Invictus Games starts with a serious mountain biking accident. After seeking help for his PTSD and spending a year in a mental hospital, Ben returned to suburban dad life with his wife and three children.

A serious injury cycling with a mountain bike saw him encased in plaster, chest to thigh, confronting the very real possibility that he may not walk again. His potential disability pushed him to the edge of utter despair. His world was bleak and dark questions began to forment. He said of the time, ““It felt like I was walking through the valley of the shadow of death.”

Ben’s recovery, thankfully, was well underway. He slowly learned how to walk again then went to counselling sessions, learning how to do something as simple as to breathe again. “Breath by breath, step by step, kilo by kilo, I found myself back at home with my family and then eventually back on the water in my rowing boat, watching the sunrise,” says Ben.

Michael Hartung, CEO of Invictus Australia notes, “Ben is a classic example of how the Invictus Games provides a starting point or a big step forward on the road to recovery, rather than being the end result in itself. What has been equally impressive in Ben’s story is that he continues to use sport in his life, every day, to improve and maintain his health and wellbeing. This is important, because not everyone wants to or will be able to go to the Invictus Games, but everyone can improve their lives through sport by engaging in their local sporting communities”.

Ben was in the process of getting back into rowing when he reconnected with the veteran community, learning from a Soldier On ambassador and fellow Invictus Games alumni, Gary Wilson, about a thing called Invictus Games.

“A lot of very supportive people said, why don’t you train with these veterans? It will be great for you. Not only help with your physical rehabilitation, but also help mentally. “And I was like, sure, don’t really know what that is, but yeah, sounds like fun.”

Ben had a chat with his wife about it and after a year of considering it, they decided to put in an application, an expression of interest. Ben says, “Then the email arrived saying yes, you’re invited to attend the first selection.”

The rest, as they say, is history. Ben went on to represent Australia at the Invictus Games in indoor rowing and powerlifting, winning two golds, one for his epic effort in the indoor row, the other for powerlifting.

These days Ben supports veterans anyway he can, supporting a litany of aligned causes. He is an Australia Day Ambassador and advocate for veterans, mental health and the healing power of sport.

Soldier On and Invictus Australia have joined forces to better support the health and wellbeing of Australia’s veterans and their families. This partnership will see the facilitation of more sport and recreational opportunities, events and resources available for the Defence community. Invictus Australia brings a wealth of sporting connections and expertise to the partnership, while Soldier On will provide support for local activations around the country, helping to facilitate sport and recreation opportunities to more veterans nationally.

Prue Slaughter, Interim Chief Executive Officer of Soldier On, said this highlights the power and synergy of the collaboration. “Soldier On is thrilled to team up with Invictus Australia. With this collaboration, we look to broaden the support network available to our veteran community, providing more opportunities for connection and making these services more accessible than ever before,”