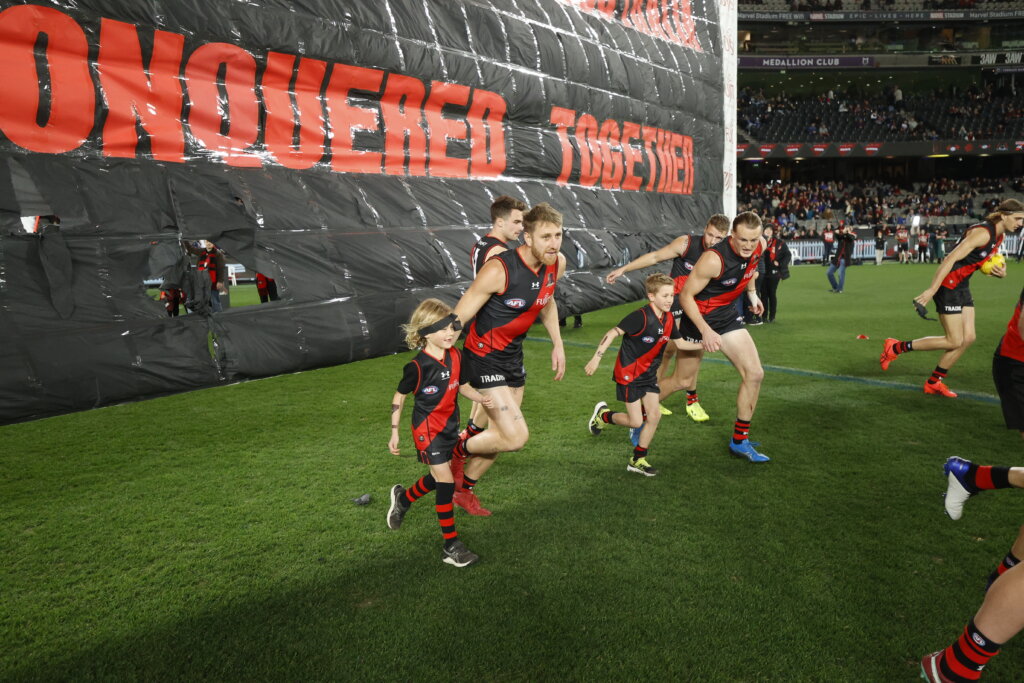 On July 31st, Marvel Stadium lit up as the Essendon Bombers took on North Melbourne in round 20 of the AFL. But that wasn’t the only highlight, as Bombers sponsor NEC Australia (NECA) took the opportunity to announce their partnership with Invictus Australia, with the ICT business coming on board for three years as a Premier Partner.

NECA used their match day rights to not only announce the exciting news, but to create a memorable experience for the local Defence community, as well as inviting some special Invictus faces in on the action.

The festivities kicked off with Chris O’Brien, who competed in Wheelchair Basketball, Sitting Volleyball and Swimming at this year’s Invictus Games in The Hague, conducting the coin toss. The Bombers won the toss – a sign of things to come.

Next up was fellow Invictus Games teammate, Lenny Redrose, who delivered the ball to match officials. A local Melbournian, AFL player & fan, amongst a long list of sporting passions, you couldn’t wipe the smile of Lenny’s face as the crowd warmly welcomed and acknowledged the local Veteran.

“I would like to say a big thank you on behalf of my family. They had a lovely time and the Bombers won! They have asked me to pass on their thanks as well to you and the organisers that allowed this event to happen. Lastly thank you and the team for supporting the ADF, Veterans and Invictus Australia, such an important organisation.” – Jimmy, Veteran

“I just wanted to write and say a very big thank you for the junior mascot opportunity you offered my two boys. They had the most wonderful day on Sunday. Quoted by them as being ‘the best day of their lives’. It was such a quick experience but one that they will both remember for a lifetime. It was such a thrill for us to watch them as the mascots. To run through the banner with the team was such an amazing experience. They have been replaying the footage non stop. They love their new jumpers and hats and enjoyed their seats in the medallion club area.

All staff who helped on the day were so beautiful and really made the kids feel special. We are just so grateful and thankful for the experience.”

The entire day was a wonderful opportunity to launch a powerful partnership to support veterans, against an iconic sporting background, with our Defence community warmly welcomed.