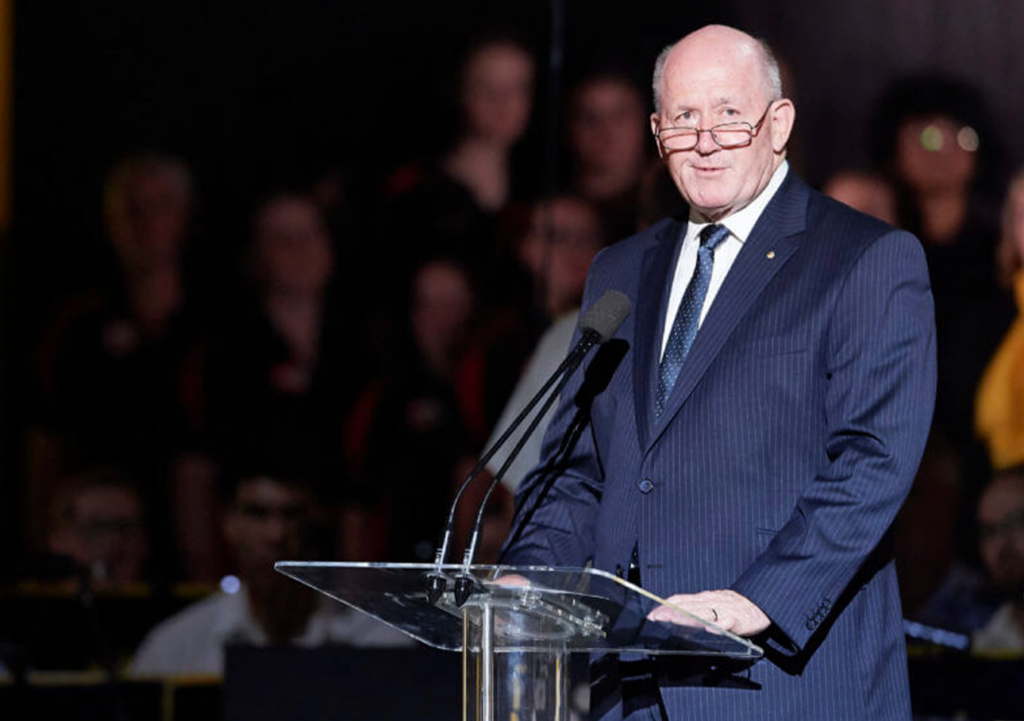 In his first official act as Patron, General Cosgrove will recite The Ode at State of Origin Game 2 in Sydney on the evening of Remembrance Day tomorrow.

Veteran Sport Australia is the legacy organisation of the Invictus Games Sydney 2018, and is committed to using the power of sport to improve the health and wellbeing of veterans and their families. General Cosgrove was instrumental in bringing the Invictus Games to Australia, being involved from the very outset of the bidding to secure the Games in Sydney right through to the closing ceremony.

Today, Veteran Sport Australia carries on the legacy of these Games, and works with a wide range of Ex-Service Organisations and sporting partners to encourage veterans and their families to become involved in physical activity. It also partners with the ADF to deliver Australia’s Invictus Games team and provides funding and support to former serving Invictus Games participants.

Through these relationships with ESOs and partnerships with a wide range of sporting bodies, it is growing to become a major force in the health and wellbeing of veterans through the power of sport.

There are approximately 640,000 veterans in Australia, with 5,500-6,000 servicemen and women transitioning out of the Australian Defence Force every year, 18% of whom do so for medical reasons. A study using data from 2015 estimated that 46% of ADF members who had transitioned from full-time service within the past five years met 12-month diagnostic criteria for a mental health disorder.

General Cosgrove’s role at State of Origin Game 2 reinforces an already-strong relationship between Veteran Sport Australia and the National Rugby League. The two organisations already work closely together around the ‘Battlefields to Footy Fields’ initiative which currently has 30 veterans around the country training to become rugby league referees. A further 150 veterans have expressed interest in joining the program.

In addition to this, Veteran Sport Australia has national partnerships with sports such as Archery Australia and Bowls Australia, offering veterans and their families access to facilities, equipment and events to encourage them to try new sports both with their families and as part of the broader veteran community, reinforcing the importance of camaraderie in veteran wellbeing.

“The Sydney Invictus Games shone a light on plight of our veterans and their families. At the closing ceremony I urged all Australians not to turn off that light.”

“Veteran Sport Australia is about using the power of sport to improve the quality of life of veterans and their families. I’m delighted to be supporting their important work as Patron.”

“The men and women who have served our country need our support, particularly as they return to the civilian community. The Australian public responded wonderfully to the Invictus Games in Sydney. The challenge is to now keep that level of support and understanding going.”

“We must all commit to promoting ways of rehabilitating the servicemen and women who have served our nation and who now need our support. Sport is a powerful vehicle for rehabilitation and reintegration but importantly is also one that can proactively support the general wellbeing of our community.”

“We’re delighted to be announcing that General Sir Peter Cosgrove will be joining us as the Patron of Veteran Sport Australia. General Cosgrove was the driving force behind the Invictus Games Sydney 2018 and is an incredible ambassador for veterans and their families.”

“It’s significant that we are making this announcement ahead of Remembrance Day, a day that is held in the highest regard throughout the Australian community.”

“We know from first-hand experience the true impact that our programs have on the lives of veterans. It is both our challenge and opportunity to continue to grow so that we can provide as much access as possible to sports programs as possible.”

“The Sydney Games was an incredible event. Those memories will always be with us; those moving stories and the power of sport in transforming the lives of servicemen and women around the world.”

“Veteran Sport Australia is focused on working with veterans and their families to get active right around the country. We see every day the power of sport utilised to improve both physical health and mental wellbeing.”

Veteran Sport Australia (VSA) was founded to carry on the legacy of the Invictus Games Sydney 2018. The program is owned and operated by Australian International Military Games, the not-for-profit charitable organisation that was responsible for organising Invictus Games Sydney 2018. VSA exists to support veterans and their families to improve their health and wellbeing through sport and recreation.