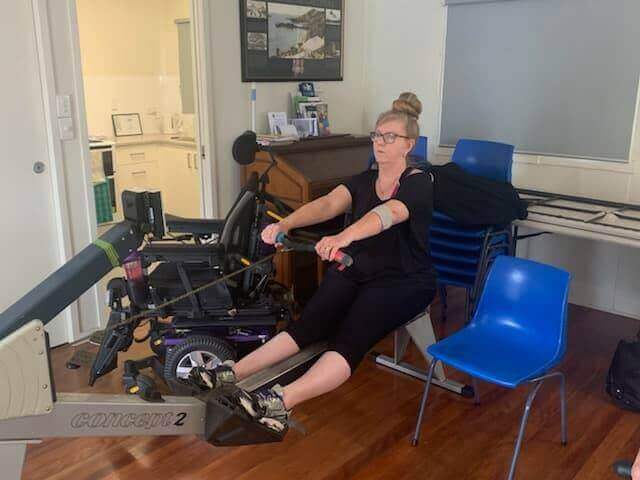 When Christine Howatt saw on Facebook that Invictus Australia was teaming up with Rowing ACT on an indoor rowing program, she immediately thought that it would be amazing to get something similar happening in her local area.

After reaching out to VSA, Christine soon got a group of veterans together to do an introductory course in indoor rowing. The group of seven former serving veterans represented each of the three services.

“It was fantastic,” says Christine. “We couldn’t have got more out of it. We were really sad on our last day and wondering ‘what are we going to do now?’”

The beauty of indoor rowing is that people of all ages and abilities can participate. You use a huge percentage of your body’s muscle groups, strengthening bones and muscles while also increasing fitness.

“People are like me, we want to keep moving,” says Christine. “We all know that if we stop moving our bodies will just shut down and we won’t be able to do anything. We just want to be active.”

Throughout the program, Christine’s group benefited from the expertise and enthusiasm of Rowing Queensland instructor Mike Partridge.

“Mike was just amazing, I’ve had such good progress,” says Christine. “When we first started, he went over the whole of the rowing machine, then he went into how to use the machine properly. He was really big on technique and on getting the most out of using the machine.”

Every session, Mike would bring indoor rowers to the Deception Bay RSL sub Branch hall for the group to use, including a seat for a group member who was in a wheelchair.

“She absolutely loved it,” says Christine. “She just wants to do this more.”

For those inspired by Mike’s work and wanting to share their indoor rowing experience with others, there are also opportunities for people who have been through the GRow program to get into coaching through Rowing Australia.

“There’s a coaching course that you can do online that’s free for any participant of the GRow program,” says Kathleen Hextell, Rowing Australia’s Indoor Rowing Officer.  “We’d like to have sustainable programs running across Australia”.

Christine has found indoor rowing to be the perfect sport to accommodate her injuries.

Medically discharged from the Navy, having served from 1988 to 1998, she had a partial knee replacement just four and a half months ago.

“I don’t find indoor rowing a strain on my knee because I’m mainly using upper body,” says Christine. “It actually keeps my legs moving too. I’m due to have my other knee done next year, so I’ve got to keep the strength up. This is doing it wonders.”

Her improved technique is also helping at the gym and Christine finds that she doesn’t tire as easily as she did before.

“When my trainer says to go and get on the rower, I’m not dragging my feet,” says Christine. “I know I’m going to be able to do it pretty well and get through it.”

Christine is a member of The Garrison, a Brisbane-based group that only formed earlier this year and already has 300+ members. She’s sure that there will be plenty of other veterans from the group who would be interested in getting involved in indoor rowing – both to stay active and to stay connected.

As for her own next steps? Having just completed the Invictus Games Foundation’s ‘Sydney to the Hague’ Challenge, Christine now has her sights firmly set on going to an Invictus Games.