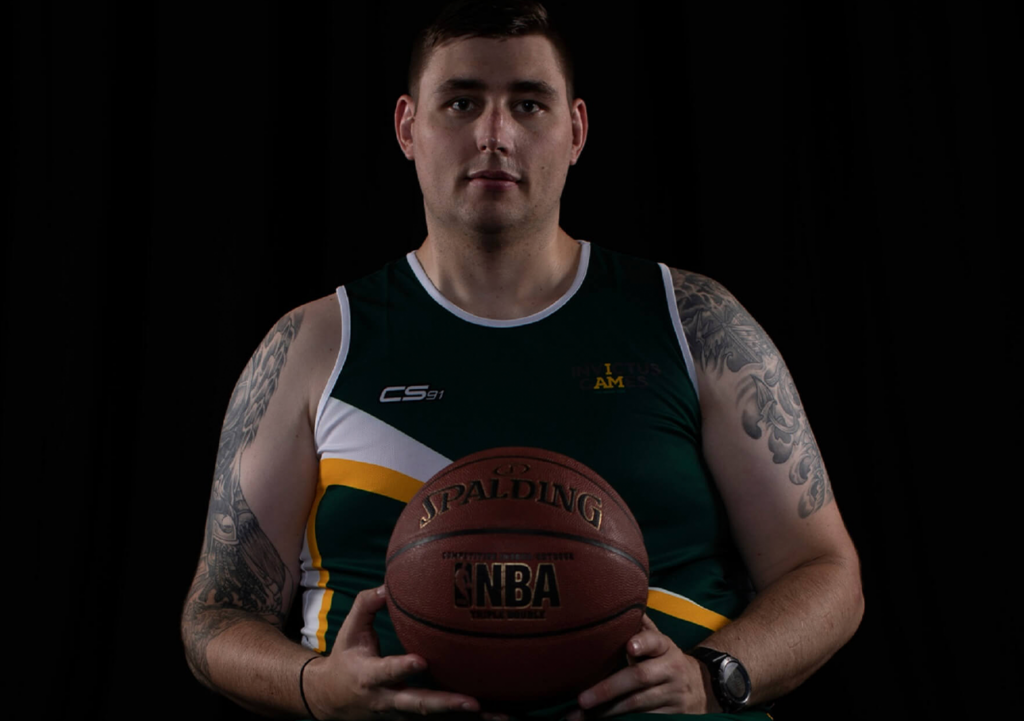 When he’s not hard at work in the office, you’ll probably find Joel Vanderzwan shooting hoops or firing off arrows at the Shirewood Forest Archers.

Having just been selected for the Australian Invictus Games team – which will now compete at a rescheduled Games in 2021 – Joel’s having to manage career ambitions with sporting commitments.

And he’s loving it.

It was just over two years ago that Joel started working for the social impact tech training organisation WithYouWithMe (WYWM). WYWM helps military veterans and their families discover their potential, trains them in IT and emerging technology and helps transition them into the right career the first time. They also provide continuous opportunities for growth to master their craft.

Joel’s recently moved on to continue his career with international consulting firm Deloitte, though credits WYWM for helping him get to where he is today.

“Without WYWM, I wouldn’t be in this position,” says Joel. “I’d been working in financial services before I moved across to WYWM in a new Customer Service role. WYWM works with a whole range of veterans and makes really important networking connections. In my role, we built a little team and started chatting to veterans about what they needed. It was a great experience.”

Life on the water

Originally from Illawarra in NSW, Joel joined the Royal Australian Navy when he was 17 years old and acknowledges that it was a steep learning curve.

An Able Seaman Marine Technician, Joel spent a lot of time off Darwin on border patrol and a highlight of his service was his work on the HMAS Kanimbla in 2010 as part of Exercise RIMPAC (the Rim of Pacific Exercise) off Hawaii. He also has good memories of driving around Hawaii with a colleague during his time off from exercises and discovering amazing surfing spots at Honolulu Bay!

Joel was medically discharged from the Navy at the end of 2012 after a serious motorcycle accident resulted in T6 complete paraplegia.

He spent 11 months in rehabilitation.

Down but by no means out, Joel used is competitive spirit to gain life skills while going through rehab. “It sounds insignificant now,” says Joel. “But learning those skills was so important and was all that I had. I didn’t think I’d ever get this far or have this many opportunities.”

Joel now works at Deloitte as a Technology Enablement Business Analyst. He and his team use technology to help companies improve and make business practices more efficient.

Joel’s had to have some time away from the office recently in preparation for the Invictus Games but says that the firm’s been hugely supportive.

“I really enjoy my job. I’m in a role where I’m constantly learning and evolving,” says Joel. “Deloitte’s a fantastic place to work. They’re heavily invested in each and every employee and we all have growth plans and goals.”

“Deloitte’s been so encouraging. The firm was heavily involved in the Invictus Games in Sydney and my selection’s been heavily publicised internally. It’s a great feeling and valuable to be able to share my perspective on rehabilitation with others.”

“Since the team was announced I’ve received so much support from the veteran and broader community. People are just happy to see someone having a go.”

Preparing for the Games

Joel will be competing in archery, wheelchair basketball, indoor rowing and wheelchair rugby at the Invictus Games when the rescheduled event is held in 2021.

Joel enjoys each of the sports that he’ll be competing in for different reasons.

On hearing the news that the Games had been postponed, Joel was disappointed but not surprised. “The Invictus Games for me is about much more than just sport; it’s a celebration of our journeys,” says Joel. “Although this is an unplanned change, it further demonstrates our ability to overcome, adapt and perform. As a team, we’ll do just that and use this extra time to build on our skills.”

In addition, Joel trains every Tuesday night with the NSW Gladiators wheelchair rugby team. “They’re a great group of athletes who have welcomed me into their training squad,” says Joel. “We do a range of activities during our training seasons, from strength and conditioning to gameplay tactics. It’s great to spend time with such incredible athletes.”

When pushed on it, Joel admits that he’s especially looking forward to competing in archery, a sport that he only tried for the first time at an event put on by Veteran Sport Australia and Feral Archery in the Hunter Region of NSW last year. Fast forward to today and he already competes at club level weekly and competed in the Archery World Series in January.

“I played able body basketball my whole life and have always played since being in a wheelchair,” says Joel. “On the court, disability doesn’t seem limiting.”