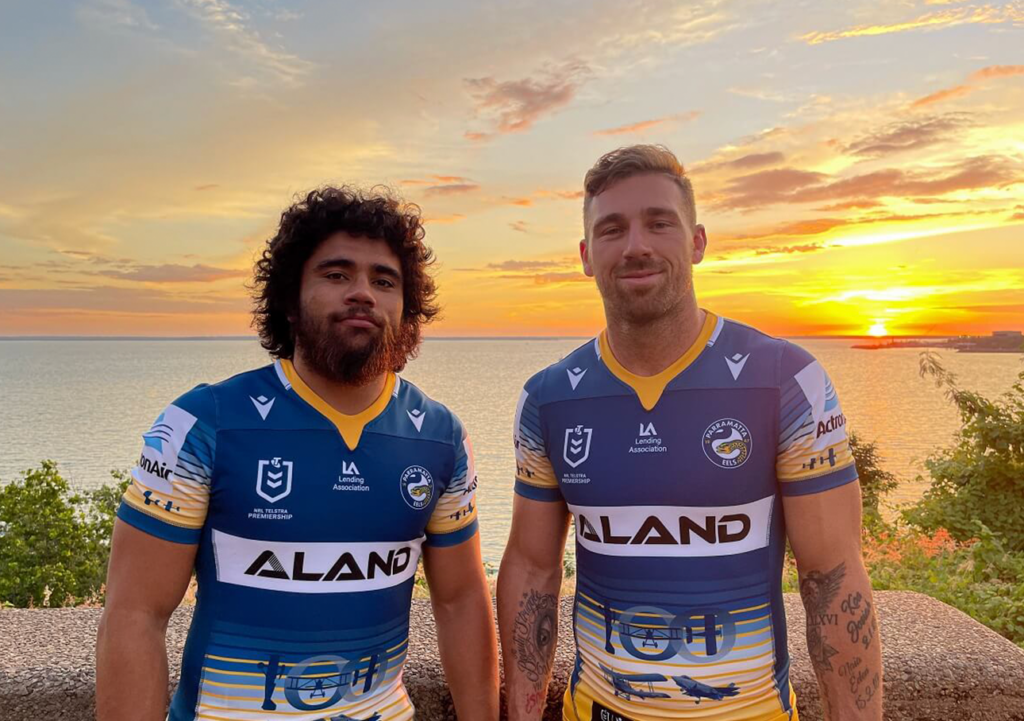 The 2021 Parramatta Eels Anzac jersey is a visual celebration of the Royal Australian Air Force (RAAF) 100th anniversary, and the Club will be donating five dollars from every jersey sold to Veteran Sport Australia.

Parramatta Eels CEO Jim Sarantinos said, “Anzac Day is a special occasion for Australians, and we are thrilled to return to our home away from home in Darwin to commemorate Anzac Day. We will honour the Anzac spirit by donating five dollars from every Anzac jersey sold to Veteran Sport Australia.”

Veteran Sport Australia is the legacy organisation of the Invictus Games Sydney 2018, and continues to utilise the power of sport as a proactive means of improving the mental health and wellbeing of veterans and their families.

Michael Hartung, CEO of Veteran Sport Australia said, “We are delighted to be working with the Parramatta Eels for the second consecutive year, by helping to identify the designer for the team’s jerseys and through events leading up to their Anzac Clash with the Broncos. It’s very fitting that in the 100th year of the RAAF it is a veteran of that service designing the Eels jersey. VSA is extremely grateful to the Eels and their fans for the donations made through the sale of those jerseys. These funds will go a long way in supporting the health and wellbeing of our veterans and their families.”

Designed by Squadron Leader Kathy Turner CSM, a permanent Air Force Veteran Engineering Officer and Active Reservist with 30 plus years’ service including operations in Kuwait and Kyrgyzstan, the jersey aligns with the Air Force 100 theme “Then. Now. Always.” to commemorate the aircraft’s modest beginnings in 1921 to its youngest RAAF Base Tindal in Northern Territory where our team will be playing on Friday night.

Other elements of the design include silhouettes in pairs to represent wingmen and mateship – dual fighters on mission, friends and teammates who serve alongside each other in battle and on the footy field. The Southern Cross from the Northern Territory state flag on the shoulder symbolises the RAAF motto “per ardua ad astra” or “through adversity to the stars”, while background stripes yellow to blue represent Anzac dawn to sunrise and passage of time.

Inspiration for the Design

The theme of this years Parramatta Eels ANZAC jersey is centered on the 100th Anniversary of the Royal Australian Air Force RAAF, which was formed on 31 Mar 1921.

The jersey was designed by Squadron Leader Kathy Turner CSM, a permanent Air Force Veteran Engineering Officer and Active Reservist with 30 plus years’ service including operations in Kuwait and Kyrgyzstan. Squadron Leader Turner is still working in defence and is a freelance Graphic Designer and owner of Graphite Design Coal Coast.

The jersey commemorates 100 years of service of the RAAF and its personnel past and present to Australia and its people.  In this time over “350,000 Australians have served in the RAAF” and “11,191 have given their lives”. Their service and sacrifice will always be remembered.

The design storyline is aligned to the Air Force 100 theme – “Now. Then. Always”. From modest beginnings to a world-class new generation force. From the first and oldest base RAAF Base Point Cook in Victoria to latest and youngest base RAAF Base Tindal in Northern Territory. From the first fighter aircraft SE5A to the new generation fighter aircraft F35 Lightning. From WWI veterans to current veterans.

The RAAF originated post WWI from genesis of the Australian Flying Corp (AFC), which was formed in in 1914 at RAAF Base Point with the Cook Central Flying School (CFS). The AFC served as part of the Australian Imperial Force (AIF) during WWI in Middle East and Europe.

Who is on the jersey?

Air Vice Marshal Frank McNamara VC CB CBE was the first and only WWI Australian Airman to be awarded the Victoria Cross (VC). This is the highest military award for valour and was awarded for service flying with No 1 Squadron in Sinai/Palestine in 1917.

As a young Flight Lieutenant, McNamara rescued a downed comrade behind enemy lines whilst under heavy enemy fire despite being badly wounded in an ultimate display of gallantry and mateship. Air Vice Marshal McNamara was 1 of 21 original commissioned officers in the fledging RAAF when it formed in Mar 1921.

Air Marshal McNamara is a unique symbol in the Air Force as the sole VC holder to have gone on to fulfil a long distinguished career including service in WWII, in Australia and overseas and to receive additional honours Companion of the Bath (CB) and Companion of the British Empire (CBE). His service to our country is commemorated by statue in his small hometown of Rushworth in Victoria. The unveiling of the statue at Rushworth took place on March 20th 2017, exactly 100 years to the day since the rescue was made. The statue was unveiled by the local RSL and attended by dignitaries from all services, including Air Marshal Leo Davies and Air Vice Marshal McNamara’s daughter, grand children and family from UK and Australia.

Australia’s first RAAF fighter aircraft was the Scout Experimental SE5A, single engine single seat aircraft, flown in WWI by No 2 Squadron AFC on Western Front. This aircraft was regarded as “Spitfire of WWI” and noted for its significant role in gaining air superiority to change tide of the war. Post WWI a large number of SE5A Scouts were given as an Imperial gift to the RAAF for No 1 Fighter Training Squadron.

Fast forward 100 years to the story of youngest RAAF Base Tindal based in Northern Territory in Katherine south of Darwin. Tindal will be home to some of the RAAF’s newest 5th generation joint strike fighter aircraft, the F35 Lightning, with 75 Squadron. The base is named after Wing Commander Archibald Tindal, the first Australian killed on home soil during WWII manning a machine gun to defend base and comrades during first bombing raid on Darwin. RAAF Base Tindal represents our future and is one of our “nation’s most strategically important defence” locations.

A symbol of our future force and current serving veterans is one of our first F35 pilots, Wing Commander Andrew Jackson Fighter Combat Instructor. Wing Commander Jackson last served in Afghanistan in 2011.

Other elements of the design include the SE5a and F35 silhouettes in pairs to represents wingmen and mateship. On the shoulder, the Southern Cross from Australian and Northern Territory Flag aligned to RAAF motto “per ardua ad astra” meaning “through adversity to the stars”. The background stripes yellow to blue represent Anzac dawn sunrise and passage of time akin to the words of the ANZAC Ode of Remembrance.

“They shall grow not old,
as we that are left grow old;
Age shall not weary them,
nor the years condemn.
At the going down of the sun
and in the morning
We will remember them.

Many thanks to the Australian War Memorial (AWM) for use of the WWI aircraft and Air Vice Marshal McNamara’s portrait created by Souciars and Department of Defence Media for use of the F35 aircraft and pilot imagery, created by Cpl Casey Gual and Staff Sergeant Marleah Roberston. Thank you to Mrs Anne Marland for permission to use Air Vice Marshal McNamara’s portrait.

Veteran Sport Australia (VSA) was founded to carry on the legacy of the Invictus Games Sydney 2018. The program is owned and operated by Australian International Military Games, the not-for-profit charitable organisation that was responsible for organising Invictus Games Sydney 2018. VSA exists to support veterans and their families to improve their health and wellbeing through sport and recreation.