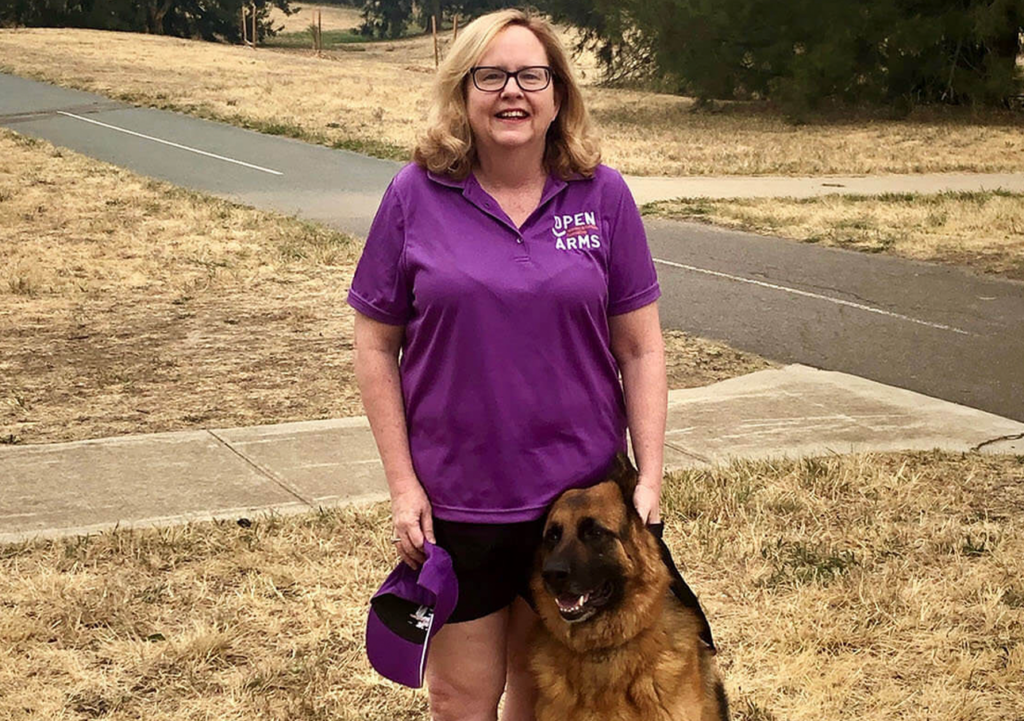 Stephanie was part of the team involved in the Invictus Games Sydney 2018, of which VSA is the primary legacy program.

She has a Defence background and now leads Open Arms, an important legacy of Australia’s Vietnam veterans who fought for the provision of mental health support for veterans and their families.

Open Arms recognises the need to look after the veteran and their family and the organisation is now going through a high need period following a time of high operational tempo for the ADF .

Stephanie is an advocate for the power of sport and talks passionately about the role sport can play in aiding mental fitness and treating mental injuries such as anxiety.

Through your role with Open Arms you must see the range of mental health needs and issues facing veterans and their families. Can you talk about what you’re seeing with this community and the types of challenges people are facing?

What I often say is that you train people really hard in the military because you know you’re going to ask them to do tough stuff. People getting ready for State of Origin focus on building their fitness and resilience as  they know they’re going to get injuries. At the end of the day, you’re asking them to do something very physical and mentally challenging.

The same is true in the military. We know that putting people in harm’s way will cause both mental and physical injuries because it’s risky and difficult work. But they are injuries from which people can recover.

The most common reaction to being on operational deployment is that personnel love their service and learn lots of skills. When people come home, however, it is a significant change in pace and they can get more frustrated with everyday life.

When you’ve been out doing something super meaningful and then you come home there can be a bit of a crash. You’ve truly been able to do your job but then you transition out and life sometimes doesn’t have as much meaning. So we have people finding it hard to find their new role in life and they miss the military family or tribe.

How do I come from a high tempo down to a much lower tempo? And how do I establish a whole new network because my friends are still in the military in that high tempo environment?  It is worth noting that we find both individuals and families can experience adjustment issues as this is a major change for the entire family.

We see that in the data. When we talk about the Transition and Wellbeing Research Program, you’re not talking about a long term complex mental disorder, what you’re talking about is the emergence for the first time of issues like social anxiety because they no longer have that group around them.

The good news is that injuries can be treated and symptoms managed, and a huge part of that is sport.

Are there any things in the research that stood out for you?

What really stood out was that within that 46% of veterans who will meet the criteria for a mental health disorder within five years how much of it was early onset anxiety issues – that is the first time someone’s been agoraphobic or had a panic attack. That’s all about people finding it hard to transition out.

The other thing about that stat is that anxiety is treatable. That is one area that, through activities like sport and social engagement, you can work through the anxiety disorders. There are some disorders that are more complex to treat but anxiety can be tackled.

“The more isolated and lonely you are the worse those symptoms are. The best way to get past that is to get reconnected. Sport is an amazing way to do that.”

You do see higher rates of depression [among veterans] than you see in the general community but I think that’s got a lot to do with that loss of meaning.

A key finding emerging from research is around isolation and the absolute importance of people engaging post-service in communities like sporting clubs.

We know that people report higher levels of PTSD, anxiety and depression but what we know from our broader research knowledge is that a mediator of that is loneliness and isolation.

The more isolated and lonely you are the worse those symptoms are. The best way to get past that is to get reconnected. Sport is an amazing way to do that.

From a holistic point of view, how does sport fit in with that treatment?

In counselling we look at how are you socially connected, how are you looking after your physical health, and what are we doing for you cognition, emotion and behaviour? We’ll ask what sport someone’s played in the past and what activities they love to do and then it’s about getting people back to those activities.

“They’re not broken. It’s an injury where you get them back to what they can do. These are people who have already demonstrated that they can do amazing stuff. It’s about reminding them.”

Veterans have already showed they can cope. Veterans were warriors, they got through recruit training, and they’ve been on deployment. When you’re working with someone like that, you’re reminding them of their strengths. You don’t have to build their strengths from scratch.

It’s the same with the families. These families have been a military family, have changed locations and demonstrated they can cope. It’s about reminding them of their strengths and reminding them what they can do. Getting them back into sport, into a community, feeling like part of a team, reminds them of what they can have.

They’re not broken. It’s an injury where you get them back to what they can do.

These are people who have already demonstrated that they can do amazing stuff. It’s about reminding them.

Can you talk about your role with the Invictus Games last year, and the positive impact that is achieved through events such as this?

Just because you have an injury doesn’t mean you can’t learn and grow from that. We saw that at the Games in so many athletes.

I thought Invictus was great because right from the planning mental health was a consideration.

For the athletes themselves, it was that amazing ability to go beyond themselves and become role models and get feedback about how others saw them.

The way they came in to support the athletes and the community was one of the things I enjoyed most about it.

At Invictus we didn’t just use clinicians, we used lived experience ADF peers. They made a huge impact in talking to athletes and their families and breaking down stigma. Recently in Open Arms we’ve gone from that team of six to a national rollout of 36 peers.

Do you have a special moment from the Games?

Because we’d been working with the volunteers to identify people who might be struggling, a volunteer actually came up to our support team to say they’d been talking to a family that was having a bit of a struggle. Because of that, the person was willing to come forward and ask for help.

The Games provided a safe place for people to admit that ‘yeah, I have an injury I’d like to deal with’.

What struck me was that the people standing up and saying ‘I’ve lived with PTSD, here I am, and this is what I can do’ actually inspired other people to come forward.

Invictus was a high profile event but more broadly what would you say about the general impact sport can have, even at a grassroots level?

I actually think that sport is fundamental to good mental fitness. If we are active in sport it’s easier to bounce back when we face a challenge. When we talk about resilience, you build resilience by having those networks that sport gives you.

It keeps you physically healthy but more importantly it gives you connections with people so when you are having a tough time you can reach out, or people will notice and give you a hand.

“I actually think that sport is fundamental to good mental fitness. If we are active in sport it’s easier to bounce back when we face a challenge.”

We should always ask if people are okay but then it’s also about taking the next step and asking how are we going to change your situation? A great strategy is getting out and getting active. Whether it’s as simple as doing a parkrun or going for a walk with a mate on a Saturday morning and having a chat, it’s going to that next step.

Sport is a wonderful avenue for support someone. If they say they’re a bit down at the moment. Getting them out moving with you is a way to help your mate.

It’s huge to mental fitness. It means if something tough comes along in your life, you’ve actually got some resources to fall back on.