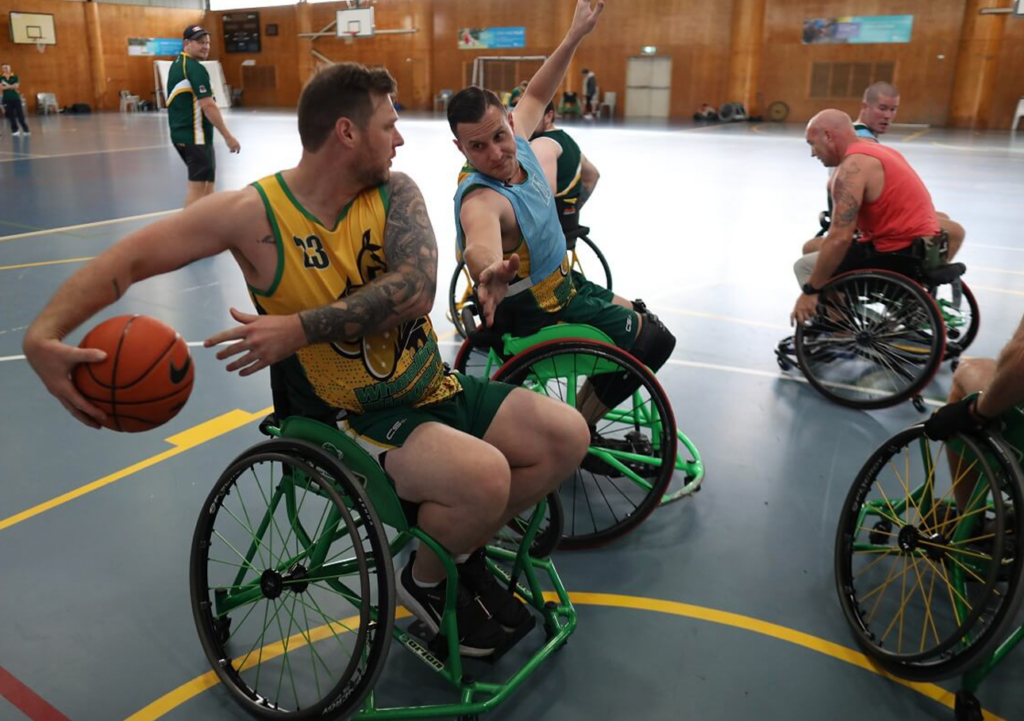 Rolling toward the Hague

In preparation for the upcoming Invictus Games, the recent wheelchair sports training camp at the Sydney Academy of Sport and Recreation (SASR) saw 16 members of the Aussie squad who participate in wheelchair sports, back together for the first time since the  Team Camp in Adelaide.

With the Invictus Games, The Hague 2020 less than a year away (16 – 22 April 2022), these sessions are instrumental to the success of Team Australia. Whether competing in individual or team competitions, the Invictus Games uses the power of sport to aid recovery, support rehabilitation and raise awareness and respect for those who have served.

Not only are these camps an opportunity for our competitors to catch up with colleagues and friends, they play a pivotal role in providing valuable training opportunities, delivering a competitive experience and building camaraderie.

This camp focused on two of the three team sports that feature at the Invictus Games – Wheelchair Rugby and Wheelchair Basketball.

Team Australia are the reigning Wheelchair Rugby champions and are looking to build on this momentum. At the Invictus Games Sydney 2018, the Aussies won a thrilling final against Team UK beating them 23 – 17 and taking home the gold medal.

Wheelchair Basketball has become one of the most popular sports at the Invictus Games. In 2018, we saw six nations compete in the sport.

Team Australia member, Emilea Mysko, believes that sport has had a positive impact on her life.

“Sport has helped my recovery because it’s allowed me to set goals, to set little stepping stones along the way. I feel a sense of achievement and sense of belonging (to a team), something to strive for together”, says Emilea.

“I really love the ability to play basketball again which is something I did before my injury and I love just being in that team environment and that mateship we have on court.”

Emilea is a part of the Wheelchair Basketball team, and will also compete in cycling, powerlifting, indoor rowing and sitting volleyball.

Along with the RSL, Veteran Sport Australia is a proud partner of the Australian Defence Force Sport Cell and the ADF’s Adaptive Sport Program, working together to support the veteran community through the power of sport.

A brief history of Wheelchair Basketball:

Following their return from World War II, a group of veterans decided to take up basketball. However, with many servicemen returning injured, it was soon evident they needed to make some changes to include them. The group decided they would all play in wheelchairs to create an even playing field. From there, it grew into one of the most popular international wheelchair sports.

A brief history of Wheelchair Rugby:

Wheelchair Rugby began in 1976 when a group of athletes with paralysis of all four limbs where keen to try an alternative sport to Wheelchair Basketball. The sport combines elements of rugby, basketball and handball.

Over 45 years, the sport has grown exponentially in both competitor numbers and audience popularity. Now, more than 26 countries actively participate in Wheelchair Rugby in some way, shape or form and it is an exciting fixture at the Invictus Games.

For further updates on the progress of Team Australia in the lead up to the Invictus Games The Hague 2020, visit us on Facebook or Instagram.