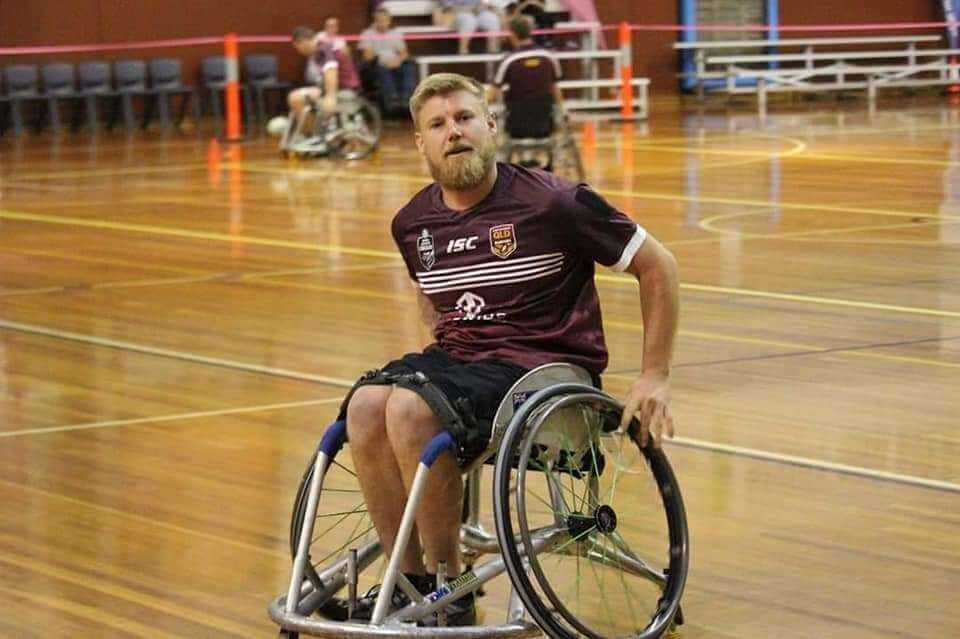 Looking for an actioned packed sport to try? Give Wheelchair Rugby League a spin!

Wheelchair Rugby League – the inclusive sport for everyone

Invictus Australia is always up for a ‘wheelie’ good time. We partner with and support, inclusive, veteran-friendly sporting organisations who share our passion. We are proud to announce our collaboration with Wheelchair Rugby League. Together we will help raise awareness and increase the participation of veterans and their families in the sport, across the country.

Everyone can play Wheelchair Rugby, no matter their age, skill level or ability

Wheelchair Rugby League is a modified version of Rugby League, designed as an inclusive recreational activity. This exhilarating sport promotes fun, fitness and self-development, while fostering good sportsmanship in a safe and positive environment. It truly ticks all of the boxes in aiding the recovery, rehabilitation and reintegration journey of veterans.

Wheelchair Rugby League is not only for wheelchair users – able-bodied participants are encouraged to play as well. As a matter of fact, able-bodied individuals can play wheelchair basketball, wheelchair tennis and even seated volleyball. Adapting these sports to be inclusive for all creates a wider, more even playing field, as well as increasing understanding of disabilities and creating strong connections, by building a sense of community through sport, and focusing on what we have in common.

After being medically discharged, Zac found a new lease on life when he discovered Wheelchair Rugby League

At the young age of 17, Zac Schumacher joined the Australian Army for the challenge and experience. Zac had moved to Perth at the age of five from his birth country of New Zealand and lived there until joining the Army in 2009.

Upon the completion of his basic training, Zac was posted to his current hometown of Townsville, Queensland.

“I was in Townsville as a cargo specialist from 2009, until my medical retirement in 2016,” Zac said.

Although 2016 marked the end of Zac’s army career, it sparked the beginning of a new chapter in his life when he became involved with Wheelchair Rugby League.

“I was playing Wheelchair Basketball locally in 2016 and was asked to attend the first ‘Come n Try’ Wheelchair Rugby League session in Townsville,” Zac recalls. “I absolutely loved the game and went from there.”

“I am fortunate enough to have played for the Queensland Wheelchair Maroons team in 2016 and 2019. I’ve also played two test matches for the Australian Wheelaroos in 2019 against England, for the Ashes, ” says Zac.

Zac said his involvement in the sport grew quickly from a casual hobby to a passionate devotion. “I have been lucky enough to help the growth of the sport across Queensland as a member of the committee.”

In addition to the competitive opportunities that Wheelchair Rugby League provides, the true beauty of the sport is the self-development and recovery it provides Veterans, as Zac has experienced first-hand.

“I’ve worked with some amazing people inside and outside of Wheelchair Rugby League. The inclusive nature of the sport, the mateship and the families that are formed is second to none. Also, the mental health benefit of being able to play sport with people who would never be able to be on the same field, is definitely one of the biggest bonuses” says Zac.

While Zac and the other Australia squad members have been able to continue training with fewer COVID-19 restrictions in Townsville, he looks forward to competing in the World Cup, which was rescheduled for late 2022. “I was in the training squad for the Australian Wheelaroos for the 2020 World Cup. We’re just waiting for COVID-19 to settle down so we can ramp that back up.”

Rachel Kerrigan, Invictus Australia’s Veteran Engagement Specialist, was introduced to wheelchair sport while competing at the Invictus Games. But it wasn’t until after the Games that Rachel joined the women’s National League in wheelchair basketball with the Sydney Uni Flames. She understands first-hand, the impact sport has on veterans and their wellbeing.

Wheelchair Rugby League is actioned-packed and full of fun. From beginners to the elite, male or female, young or old, it’s a challenging and rewarding sport. So, why not give it a spin?