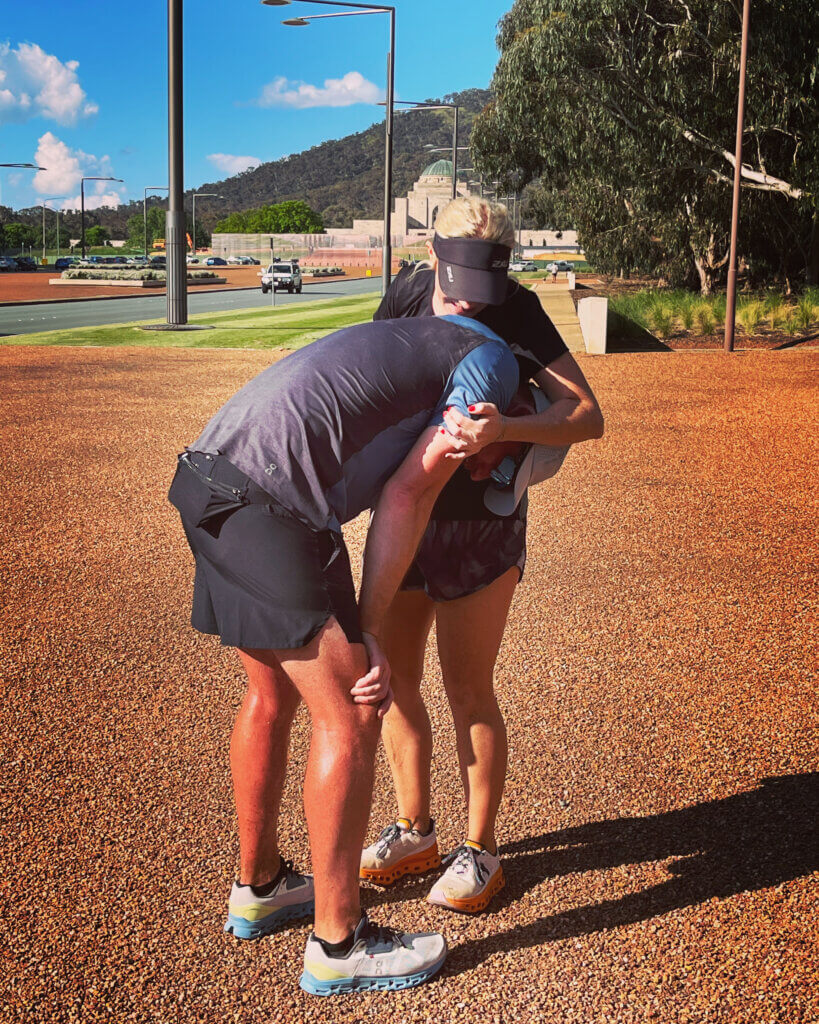 A life changing accident, a challenging recovery rooted in a love of sport and running hundreds of kilometres each week training has seen Rodney ‘Rocket’ Cottam become one of Invictus Australia’s most dedicated and driven fundraisers.

Run Rocket Run is about pushing boundaries to achieve our goals. Conquering any obstacle. Just like Invictus Australia we are unconquered together.” – Rodney ‘Rocket’ Cottam

Rodney’s fundraising goal of $35k for 350km was smashed as he handed over a cheque for $40,000 to Invictus Australia’s Vanessa Bernardo on Thursday night at the celebration event to mark the culmination of this epic challenge.

“Rodney epitomises the Invictus spirit, showing that sport, and in this case running can have a profound and healing impact on wounded, injured or ill veterans. Coupled with the support of his incredible partner Amanda and best mate Lee, who were by his side the entire journey, there is no-one better equipped to talk to our ethos of being Unconquered Together and the power of sport to strengthen veterans and families health. We are in awe of Rodney and can’t thank him enough.” – Vanessa Bernardo, Invictus Australia

Family, friends, supporters and the community are an intrinsic part of any veteran’s journey of recovery and are fundamental to the Invictus philosophy. In this case, Rodney’s tribe ran, drove, funded, FaceTimed and cheered him on from the conception of the plan, through to this well deserved wrap party.

Jaguar Land Rover Parramatta were one such partner, providing a car for the journey and hosting the event. According to Sales Manager Kenny Lam:

“Resilience can manifest itself in many different forms, holding a unique meaning to us all. We all came together last night at Parramatta Jaguar Land Rover to host and celebrate the completion of Rodney Cottam‘s challenge to run 350kms in 5 days under the RunRocketRun campaign. The journey took him from Moss Vale to the top of Mt. Kosciusko, raising money for Invictus Australia.

We were lucky enough to hear from Invictus Games alumni Joel Vanderzwan, Peter Miller & Peter Brown as they spoke about how resilience gained through sport has helped their healing. All three are wonderful examples of how involvement in an Invictus Games is a catalyst for ongoing recovery – a springboard into local sporting communities that can create sustainable benefits.

And it was unlikely supporters discovered along the journey that gave Rodney an unexpected lift, and reminded him that when we’re struggling, there is often someone nearby willing to give a kind word or help out.

Whether it was road trains giving encouraging toots, tourists pulling over to say thank you, local RSL members cheering Rodney across a daily finish line or local pollies, there was no shortage of gratitude and acknowledgement.

Councillor Daniel Strickland was one such supporter, welcoming Rodney at the local memorial as he finished Day One. According to Strickland, “It was an honour to meet Rodney and his small team at Rocky Hill War Memorial along with our Mayor and Deputy Mayor, as he embarks on a challenge … to promote mental and physical resilience and to raise money for Invictus Australia.”

Who is Rodney ‘Rocket’ Cottam?

Rodney is an ex-military man of the 3rd Battalion, Royal Australian Regiment who loves to run — and whose love of running has helped him overcome some pretty major challenges.

In 2004, Rodney was in a serious motor vehicle accident, sustaining several injuries including a spinal injury, fractured pelvis, broken ribs, punctured lung and multiple lacerations. After two 10-hour surgeries and 12 months of treatment, his long-term prognosis caused by spinal nerve damage is a condition called Brachial Plexus Palsy, which has left Rodney permanently paralysed in his left arm.

In a split second, Rodney went from being an elite soldier, in the best physical shape possible, to completely losing all movement and feeling in one arm, from shoulder to fingertips.

Rodney’s military training and previous experience as a high-level sports competitor instilled a strong sense of resilience that helped him make a crucial decision at this point. Rather than hate the world and see what happened as a negative, Rodney chose to accept the change, move on and live the best life he could.

He turned to running, something he’d always loved. It was a challenge after the accident, as he had no strength or support in his shoulder joint. But over time, Rodney found his balance and rhythm, transitioning from an elliptical machine to a treadmill, then to road and trail running.

Eighteen years later, he now runs at least five days and up to 100kms per week, usually on trails, which he loves for the beautiful scenery and the diversity of the terrain.

Rodney is passionate about resilience and recovery and fully embraces Invictus Australia’s mission to strengthen veteran wellbeing through sport. So much so that this is just the first in a list of yearly expedition that will see Rodney embarking on breathtaking trail-running adventures around the world.

The next run is penciled in for May 2023 – watch this space!

Learn more, get in touch with your own idea to fundraise for Invictus Australia or donate: