The red and yellow cap is an Australian icon.

For more than 100 years, the surf life saving movement has saved literally hundreds of thousands of lives on our beaches. Around 12,000 lives a year.

But how about this? Veterans are a huge part of the surf life saving community.

James McLennan is the Club Captain of Bronte Surf Life Saving Club. He’s been a life saver for 14 years, is a veteran and is very proud of his service to both organisations. .

“Surf life saving is similar to the military – it requires solid training, teamwork and an enduring commitment to ensure a positive outcome,” says James. “As a veteran, it gives you a meaningful avenue to utilise your service skills whilst transitioning into the community. It’s a bit like swapping one uniform for another as supporting your mates whilst protecting others is a key mission objective”.

Situational awareness and the ability to calmly engage resources in an effective manner is a common trait between veterans and lifesavers. Given the numerous meritorious awards members of Bronte Surf club have received in the service of others, it’s by no accident the motto “Train Hard – Rescue Easy” is often heard around the club these days.

There are so many different ways you can get involved in a surf club, with the Bronze Medallion being a key pathway to becoming a life saver. Bronte Surf Life Saving Club is holding a Bronze Medallion course in November, which veteran Ryan Tindall will be instructing. He’s keen to see veterans get involved.

Ryan is a volunteer instructor at Bronte Surf Life Saving Club. He was with the ADF for more than 12 years, serving all years in Special Operations Command in 2nd Commando Regiment and the Special Forces Training and Education Centre (SFTC).

Ryan did his Bronze Medallion as part of his work with the ADF. But he never joined a club.

“I only went down to Bronte after leaving,” says Ryan. “I knew I needed something. I knew that I didn’t have a sense of belonging after leaving the army.”

“Everyone needs an activity; we all have a desire to have something to do. Surf life saving is a great way to give back to the community,” says Ryan. “Members of the ADF have a sense of service. That doesn’t just change on leaving.”

A lot on offer for veterans

Kimberly Johns works in Lifesaving and Education Administration at the Bronte Club and agrees that veterans bring a lot to surf life saving – and that the movement can also offer a lot for veterans.

“For us, it’s about having people involved with a really nice breadth and depth of skills. So much of surf life saving is about communication and teamwork,” says Kimberly. “There are so many ways to get involved in surf life saving and you don’t have to be life saver. Everything you do contributes to the overall service we provide to the community.”

“It’s also a way to be really challenged and make new friends,” says Kimberly. “I’ve made some of my very best friends in this club. We support, encourage and push each other.”

Ryan Tindall says that both current and former serving members should seriously think about getting involved and do the Bronze Medallion. “You’ll have something to go on to that’s not military. I’ve meet other people that I definitely wouldn’t have met otherwise. It bridges a gap.”

“It’s also a way to be really challenged and make new friends. I’ve made some of my very best friends in this club. We support, encourage and push each other.” 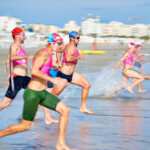