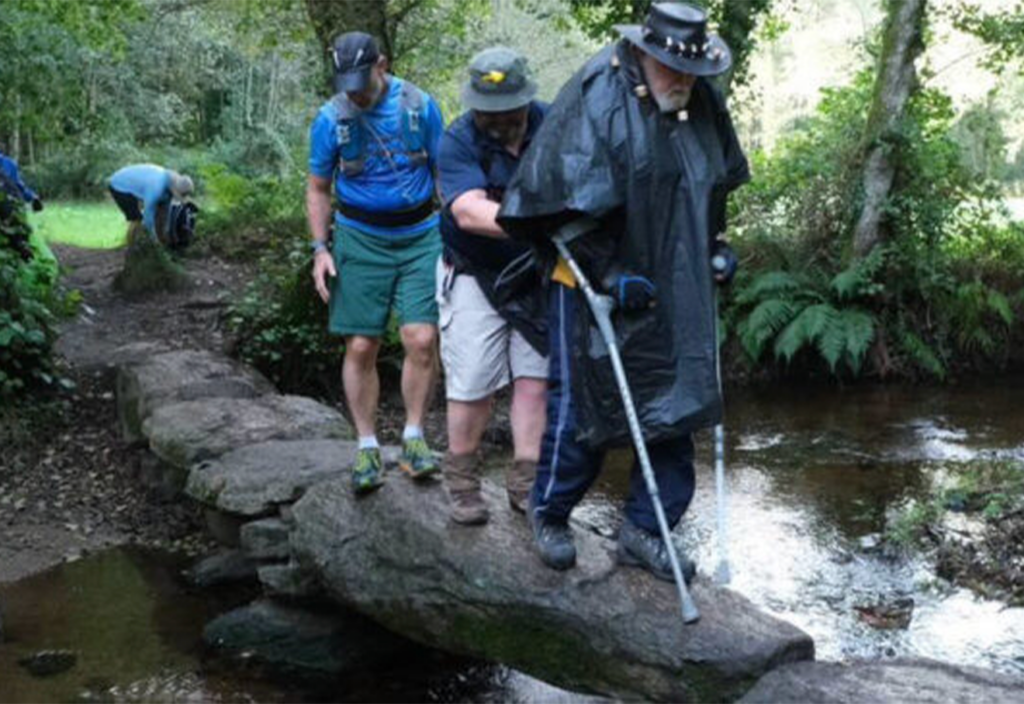 The power of the Camino de Santiago

The Camino de Santiago is a Christian pilgrimage in Spain that roughly 350,000 people complete every year. The pilgrimage has a long history going back to the 8th century. While many undertake the pilgrimage for spiritual and religious reasons, others embark on the Camino for the challenge, or simply to improve their health through physical activity.

According to Tony Jacques, a veteran of the Australian Army whose specialty was bomb disposal, the Camino isn’t beyond anyone’s reach. It’s a remarkable experience for ordinary people from all over the world to step out of their comfort zones and challenge themselves both physically and mentally, and “to do something extraordinary”.

Tony is a member of the Blackheath/Mt. Victoria RSL sub-Branch and has served as Vice-President and Honorary Secretary over many years. Tony first heard about the Camino through his wife Ce who had seen a television show on the journey many years before they considered going. It inspired Ce, who has had a long career as a nurse, to undertake the Camino even though she had undergone two knee replacement surgeries.

After extensive research from Tony – “I planned it within an inch of its life and flew it with Google Earth three times!” – and following some minimal training, the two embarked on their first Camino in 2014 and walked the Camino Frances route. The route begins in France in St. John Pied de Port and finishes in the Galician region of Spain in Santiago de Compostela. It is 780 km in length and took Tony and Ce 36 days to complete.

It is said that the Camino has three stages. The first is for the body, which is all about physical fitness. The second is for the mind, and overcoming the mental challenges required to complete the Mesata stage. the final stage is for the soul. People also refer to the three stages of the Camino as birth, death and resurrection.

The Camino is very difficult. “The body really suffers,” says Tony. “You have to nurse your body and listen to it.” However, as Tony says, “knowing that you are walking in the footsteps of hundreds of thousands of people over many centuries inspires you to keep pushing ahead”.

To officially complete the Camino (especially if a certificate of completion is what you want), Pilgrims or “Perigrinos” need to complete at least 100 km of walking or 200 km of bicycling. While there are many different starting points in Europe, with routes that vary in length, all pilgrims finish at the Cathedral in Santiago de Compostela.

Due to the physically and mentally challenging experience, sometimes people can’t bear to stop when reaching Santiago. Often people will continue to Cape Fisterra, which was once believed to be the ‘End of the World’.

Tony and Ce consider themselves ‘Camino Tragics’ as they have now completed five. Throughout the walks over the years, Tony has sometimes shared the remarkable story of two best friends, Justin Skeesuck who is paralysed from the neck down, and Patrick Gray – his best friend, who pushed Justin along the Camino Frances. They were one of the first pilgrims to take a wheelchair along the walkers’ and not the cyclists’ path on the Camino.

Their trip has been made into a documentary called ‘I’ll Push You’ – an inspiring story of its own. Two years ago, Tony arranged for this documentary to be shown in Mount Victoria in the Blue Mountains, NSW. The story resonated with Vietnam veteran Graeme Bolitho, who is a fellow member of the Blackheath/Mt. Victoria RSL sub-Branch. Tony describes him as “highly decorated”. Graeme sustained injuries from his service during the Vietnam War and is now assisted by crutches when walking.

After watching the documentary Graeme considered the possibility of doing the walk and Tony said, “I’ll Push You”. However, Tony acknowledges that it was only a “joke” at the time, but it was to become a reality.

Patrick and Justin had become good friends with Tony and they reached out in December of 2018 with an idea to arrange an ‘Accessible Camino’ trip – the first of its kind. Patrick and Justin planned to take a group of mobility challenged adventurers the final 100 km of the pilgrimage from Sarria to Santiago on the walker’s pilgrim path, which is nearly inaccessible to wheelchairs in many parts.

In early January 2019, Tony and Graeme were accepted to join the 11 teams and were the only non-US/Canada team to go. As it was not going to be feasible for Graeme to use his crutches for the entire six days of the walk, Tony needed to source a cross country wheelchair. Unfortunately, this became a very difficult task and couldn’t be easily found anywhere in Australia or Spain.

With support from Invictus Australia, City Tatts, Blue Mountains Camino, as well as friends and family, enough money was raised to commission the construction of a special chair. Tony found the manufacturing company Melrose in New Zealand who made Graeme a Melrose “Spartacus” Cross Country Wheelchair.

In September 2019, Tony and Graeme, along with Graeme’s wife Sandra, undertook the Camino with Patrick and Justin and the other participants. In total there were 10 people in chairs, one blind lady with her sighted guide and more than 35 strong pushers together with many pilgrims along the way.

This particular Camino for Tony taught him that you can’t do it on your own and that success comes from everyone on the Camino helping each other out. Tony used the example, “if someone takes off their boot, everyone usually stops along the path and asks if they can help. This is the beauty of the Camino”. People clearly want to lend a hand and do everything they can to help people reach their goals.

Throughout the Accessible Camino, there were times where the hills were enormously steep, and more than one pusher was required to help individuals over the hills. At times wheelchairs needed to be lifted to overcome some of the uneven terrain, and to cross bridges barely wide enough to walk over. Graeme’s chair tipped over twice and on the second day and he even fractured his jaw but refused to stop and soldiered on.

By the end of the six days the group had become lifelong friends. As Tony highlighted, “every hour you spend talking on the Camino is the equivalent to one year of friendship”. It was the most rewarding Camino walk he has done, even though it was just seven days of walking. A sense of community was created, which seemed familiar and had the hallmarks of military “camaraderie when going into battle”.

After the Accessible Camino trip in 2019 Tony and Graeme decided to leave the wheelchair in Santiago, Spain. As they noted, “Anyone from Australia can use it and we thought that would be a nice legacy to leave behind”.

For Tony, this Camino demonstrated pure love, a term he doesn’t use lightly. He plans with his wife Ce to continue venturing over to Spain and undertaking the Camino for as long as they are able. As he explains, “You think you’ll never do it again but after a couple of months the Camino calls you back”. This shows the power of the Camino de Santiago.

Since their first Camino, Tony and Ce helped co-found the Blue Mountains Camino Supporters Group. The Group comes together to share the spirit of the Camino by embarking on training walks, having discussions and watching videos about the Camino. Everyone’s welcome! If you’re interested in learning more about the Camino, or walks that you can do here in Australia, please contact Invictus Australia and see below for more information! support@invictusaustralia.org