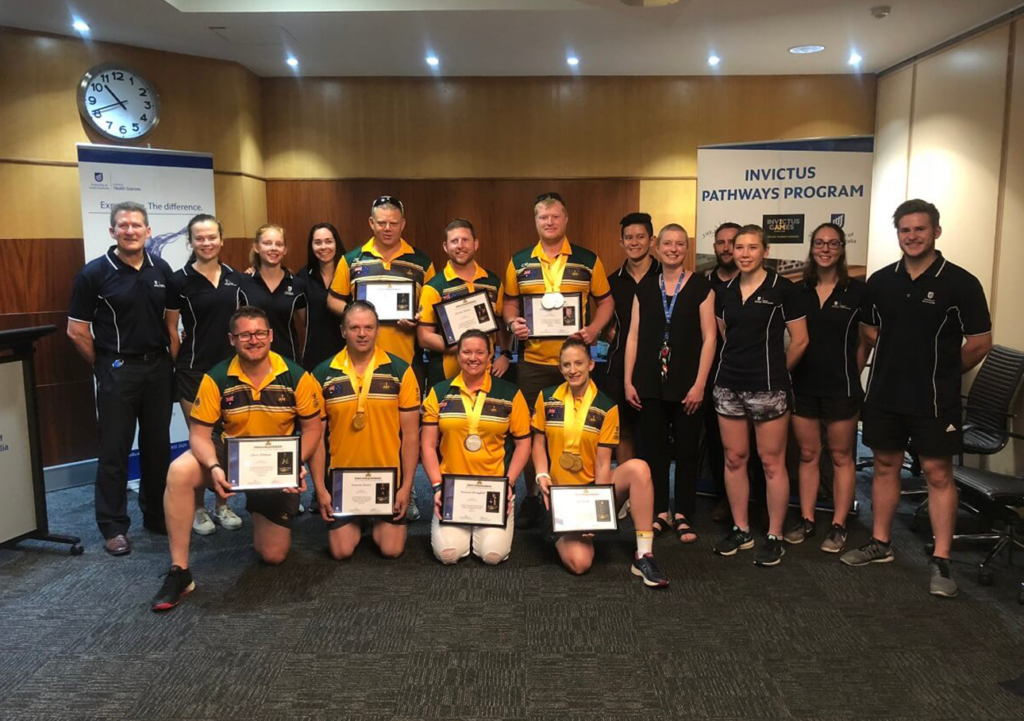 When Mark Reidy returned from competing in the Invictus Games in Orlando in 2016, he knew there was an opportunity to create something back home.

“I went over and that was a big eye opener for me. Seeing all these other men and women from competing nations, but not just that, also seeing family and friends was important, seeing them cheer on,” says Mark.

“I thought that we could do something here, there could be a ripple effect.”

And so, the beginnings of the Invictus Pathways Program were born.

The IPP is now run out of UniSA in Adelaide, having been transferred to the university by the Hospital Research Foundation, The Road Home charity for veterans and first responders.

The IPP is open to current and former serving veterans, and first responders, who have physical, emotional or psychological conditions. It’s a wellbeing program that uses the power of sport for community integration. There have been 143 participants over four years, with families also able to get involved.

UniSA Allied Health & Human Performance students play a vital role in delivering the program, undertaking placements in the adaptive sports and wellbeing fields. Students get invaluable real-world experience, while veterans benefit from receiving personal training two to three days a week, all supervised by qualified academic staff. The community activities model is then also added to the mix, including a full range of activities, sports and programs – from wheelchair sports to archery, cycling and everything in between.

But that’s only part of the win / win.

“The rapport between students and veterans is fantastic,” says Mark. “You’ll see a lot of students give up their time to come and help out. They’re just part of the family now.”

Michael Hartung, CEO of Veteran Sport Australia, would like to see similar opportunities for veterans and their families around the country.

“Our goal is to see similar opportunities created in other States and Territories,” says Michael. “We know there is strong demand for this sort of positive environment from the success of the IPP in South Australia and by the number of applications we see for the ADF Adaptive Sport Program, which helps prepare our Invictus Team.

“We want to get to a point where every veteran who’s interested can take up a local opportunity like the IPP to stay active and improve their wellbeing.”

Mark knows first-hand the benefits of rehabilitation through sport.

A 16 year veteran of the Australia Army, Mark joined in 1990 and left in 2006. He spent a total of seven years overseas – including four years at sea. He was involved in nine deployable operations including to the Solomon Islands, Papua New Guinea, East Timor and finally Iraq.

“I spent six to eight months over in Iraq. We went in for the initial invasion and to the Western Desert. It was an experience,” says Mark. “It had its scary moments, but it was more of an eye opener for me. Working with other coalition special forces for the first time was a great opportunity.

“I was probably only home for a couple of months again before I got asked to go back to Iraq, this time with the US Air Force. That was probably the scariest time I had. Being embedded with 12,000 Americans, and there’s only 12 Australians who were in there at Baghdad airport. That got hit quite a bit by insurgents.”

When he returned to Australia, and ultimately discharged, Mark had both physical injuries and the invisible wounds of war.

“I still wanted to be a career soldier but didn’t think I could any more for my children,” says Mark.

Back home, Mark went on to work in the defence industry and with a number of veteran organisations. Importantly, he also found cycling – albeit by accident.

Cycling to get back on track

It was watching the Tour Down Under, a World Tour cycling race that winds its way in and around picturesque Adelaide, that Mark got inspired. He bought a cheap road bike and got peddling.

“I just chipped away at it. At that stage, I could only ride 10 to 12 kms and I’d be knackered, but I wouldn’t get off the bike,” says Mark. “Then I started joining the Adelaide Cyclists community group, which is a bit like parkrun – all people from different communities wanting to meet new people and get active and socialise. And it was that social interaction that helped me.

“People might walk faster than me going up a hill, but I’m still peddling and that’s the main thing. Once I get to the top, I’ve achieved something. That’s when you start to feel alive, your head’s clear and you’ve got your thoughts together. You get a better outlook on the world and your life.”

It’s proven to be a powerful message and one that’s been central to the success of the IPP.