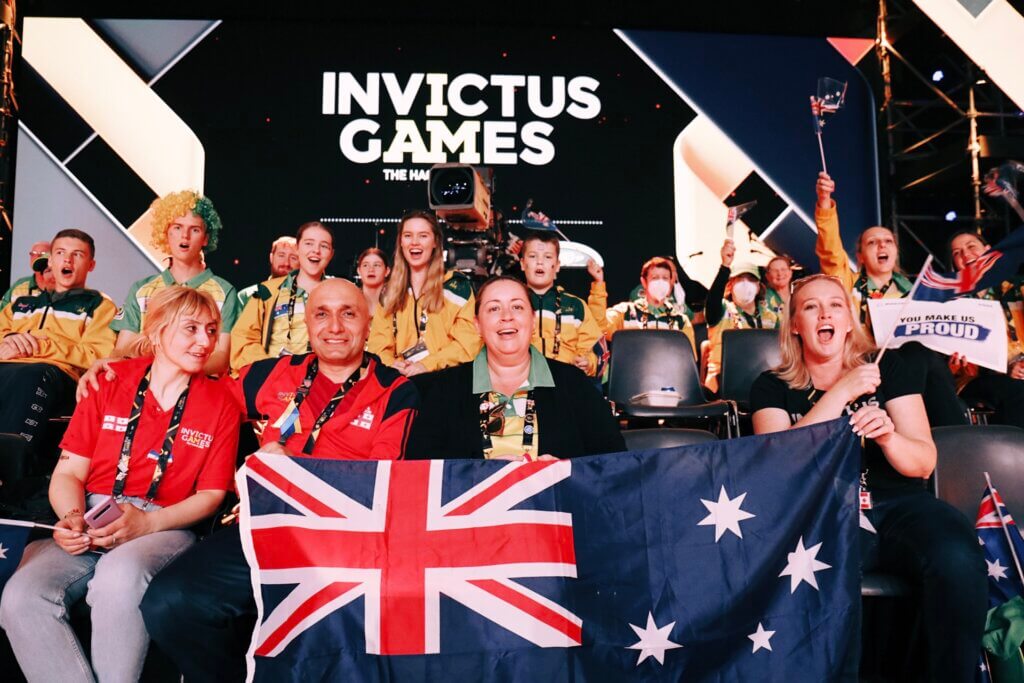 Check out the best and brightest moments from Day Three of competition in The Hague and stay tuned tomorrow for all the action in the pool and with our Wheelies.

spirit of invictus shines with our sitting volleyball team

Even though we didn’t make it through to the finals, our sitting volleyball team are already winners! They showcased incredible skills and mateship on the court – putting up a good fight all the way.

The competitors were treated to another roaring crowd with our amazing friends and family getting behind the team. We are so proud of you all!

All eyes were on today’s Athletics finals at Zuiderpark. Family and friends cheered on our Aussie competitors in the men’s IF4 discus this morning, with Team Australia Co-Captain Sergeant Shane Bramley scoring a gold medal for his efforts.

Shane paid tribute to his team mate and training partner, Damien Irish who placed 6th, during an interview after the event.

He said the best part of the games so far had been sharing the experience with his son, Nathan, and his wife, Cindy.

“Nathan and Cindy have never seen me compete until here at the games,” Sergeant Bramley said.

“By being here, they can see that I’m relatively normal in the veteran community.

“Sometimes we’re a bit withdrawn and quiet as we’re dealing internally with own thoughts or with chronic pain, but that’s all good. We’re all normal.”

Emma Murfet claimed her second gold medal of the games, winning the women’s IT7 100m, and her second silver medal, finishing just 0.02 seconds behind Lisa McCranie of Team USA in the IT7 200m final.

Gabriel Ramon is still struggling to come to terms with the fact that he will be returning home with an Invictus Games silver medal.

For the former Royal Australian Air Force airfield defence guard, who has a deteriorating knee injury first sustained during a field training exercise, getting to the athletics field to compete in shot put was a victory in itself.

“I just expected to go out there to have a good throw and do the best I could. To get a medal is an extra bonus,” Ramon said of his men’s IF4 shot put performance.

Since his selection for the Australian Invictus Games team, he has been on what he describes as “one hell of a ride”, losing both his sister and his father in 2020.

He credits his Invictus journey with helping him through some of his darkest moments.

“It’s put me back on that field again where I can focus on a sport that I thought I couldn’t do. I never would have thought of that until I was helped by Invictus,” he said.

Flight Sergeant Nathan King finished with a silver medal in the men’s IF5 discus, sharing a beautiful moment with his family after his event.

His three children – Braedon, Georgia and Micah – his wife, Catherine, and his parents all made the journey to The Hague to watch him compete.

Almost five years ago, Flight Sergeant King suffered an injury to his left thigh, which confined him to the intensive care unit for six weeks and required an additional seven months of rehabilitation.

He said his medal was a tribute to his family, who have played an integral role in his recovery.

“They’re the reason I got out of the hospital bed,” Flight Sergeant King said.

“Getting to the games was my way of giving back and saying thank you to all the carers, the hospital staff and my family support.”

the power of volunteers

There are no events without volunteers! They are a crucial part of the success of international events such as the Invictus Games, but also in grassroots sporting clubs from Little As, to parkrun to your local touch footy game. Thank you to all the volunteers at The Hague, and remember – it’s a great way for veterans and families to stay connected and active in local communities, year-round too.

have you been inspired? Time to act

We’re asking you to turn inspiration into action to support our wounded warriors. If you’re inspired by our unconquered heroes in The Hague, we ask you to rise beside them this May. Sign up for the Invictus Australia ZERO600 Morning Routine Challenge today, to support veterans and their families wellbeing through the power of sport, after the lights of the Games have dimmed. Funds raised will support future Invictus Games teams, as well as our local sporting programs.