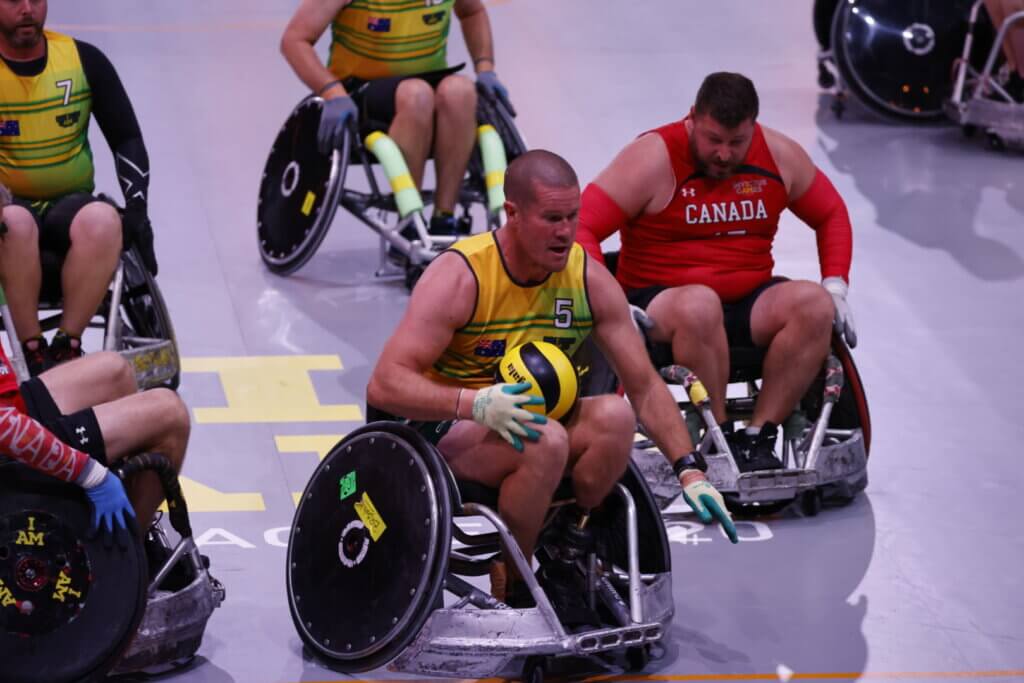 From the courts to the pool, resilience, courage and teamwork were on display as the Wheelchair Rugby pool matches got underway, and our swimmers made a splash with impressive results.

The Invictus spirit is about the journey rather than a medal tally, however with Australia as the defending champs in Wheelchair Rugby, it was always going to be a special moment when the team rolled onto the court.

Check out the best and brightest moments from Day Four of competition in The Hague. And keep scrolling for a video overview from all the Nations.

The combination of speed and power is intense when crowd favourite, Wheelchair Rugby, kicks off.

The grandstands were packed with family, friends and supporters rallying around our competitors all day as Australia played five matches. Camaraderie replaced competitiveness both on and off the court.

Team AUS started strong with a win against Canada, unfortunately losing their second match against Team USA, but going on to win their next two matches against France and Italy respectively. Despite playing their hearts out, they lost their last match of the day to Team UK. All of which adds up to a shot at the medals tomorrow!

The swimming made for some fierce but friendly competition and the stands were electric as competitors put on a spectacular show with Team AUS collecting a mass of medals.

There were also lovely scenes as the Duke of Sussex spent some time with the Aussies, chatting and congratulating all their efforts.

Incredible effort to all who competed. While the medals are undoubtedly nice and very well deserved, it’s the support and care the team continually show to each other, the respect for one another’s experience and the joy they feel for other’s success – it’s evident they all have one another’s back, and that is what sport is all about.

Fantastic effort to all involved, including the incredible energy brought day after day by family & friends and the skill and care of all the coaches, team management and staff.

We truly are Unconquered Together.

Beautiful words from the fiancé of one of our competitors about what happens beyond the Games.

what will you do beyond the games?

We’re asking you to turn inspiration into action to support our wounded warriors. If you’re inspired by our unconquered heroes in The Hague, we ask you to rise beside them this May. Sign up for the Invictus Australia ZERO600 Morning Routine Challenge today, to support veterans and their families wellbeing through the power of sport, after the lights of the Games have dimmed. Funds raised will support future Invictus Games teams, as well as our local sporting programs.

vision from day four at the hague